A Short History of The Wedding Dress 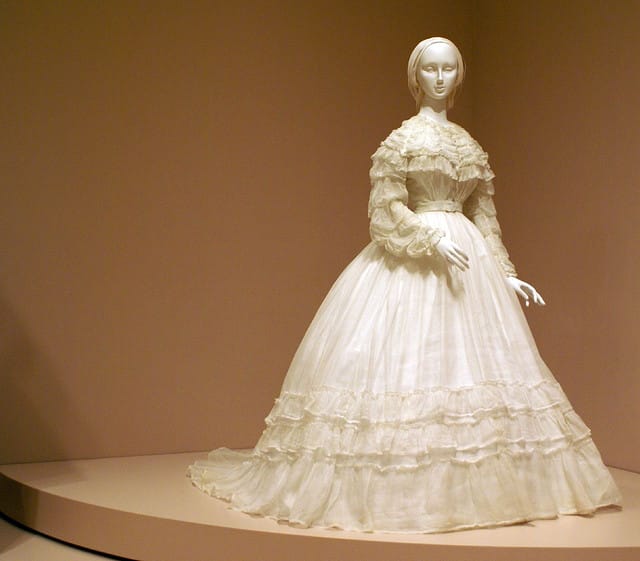 As you enter the store filled with wedding gowns filled with lace and bling in search of the perfect dress for your special day, you cannot help but feel like you are performing a rite of passage. However, this maddening search for just the right wedding dress has not always been the trends as it is today.

In the Middle Ages and earlier, marriages were not the joining of two people deeply in love, but instead a prearranged affair by parents who hoped to gain influence or monetary concerns through the marriage of their children. During this period, women wore their best dresses to be married, which had been worn on other occasion and would continue to be worn.White dresses were not necessarily selected. In fact, these dresses were generally darker colors to better hid stains and wear and tear on the fabric. Green was avoided because it was considered an unlucky hue, while blue was popular due to its symbolism of piety and purity.The idea of a white dress dates back to the wedding of Queen Victoria to her cousin, Albert in 1840. She wore a stunning white gown that was accentuated with gorgeous orange blossoms. So stunning was her gown that many commoners followed suit and wore white gowns to their own ceremonies.In the 1850s, Godey’s Lady’s Book, an American fashion magazine declared white to be the best color for wedding dresses and the most complementary to young brides. After the publication of this article, white wedding dresses became a status of wealth and social status. Finding white fabric was not easy as there were no chemical process invented yet to give a pristine white and many resembled a dirty eggshell. The Industrial Revolution brought new sewing techniques that allowed for gowns with more and more fabric.

During the Great Depression, the scarcity of expendable income led to the return of women wearing their best dresses in darker colors and foregoing an unnecessary expense. Following the Second World War, families began to experience rejuvenated wealth and a return to elaborate, white wedding gowns.

Just like Queen Victoria’s inspiring wedding gown, several popular figures in the second half of the 20th century influenced wedding gown styles. From the elegance of Grace Kelly and the puffy sleeves and immense train of Princess Diana, brides find inspiration in gorgeous gowns reserved for their special day and happily ever after.