Why Do People Celebrate Quinceañeras?

The quinceañera celebration is a once-in-a-lifetime event for young Hispanic girls that symbolizes their transition from childhood to becoming an adult. For cultures that celebrate quinceañeras, a girl’s 15th birthday marks one of the most lavish celebration of their lives – right alongside with their wedding.

According to Encyclopædia Britannica, “The quinceañera is both a religious and a social event that emphasizes the importance of family and society in the life of a young woman. It is celebrated in Mexico, Latin America, and the Caribbean, as well as in Latino communities in the United States and elsewhere.”

The New York Times elaborates even further, explaining that quinceañeras are, “Widely celebrated among Latinos, the quinceañera marks an important milestone in a girl’s life. Part birthday party, part rite of passage, it symbolizes a girl’s entrance into womanhood when turning 15, traditionally showcasing her purity and readiness for marriage.”

How are quinceañeras celebrated?

The quinceañera celebration – which is most often associated with select Central & South American cultures, notably Mexico, Puerto Rico, and Cuba – typically includes many familiar features of traditional religious ceremonies, like a special mass in which the person being celebrated reaffirms their dedication to God while receiving a blessing from a priest. That’s because the festivities are inspired by indigenous and European cultural traditions.

Following mass, a reception is thrown, which is similar to a typical wedding reception. This can involve elaborate arrivals, choreographed dance sequences, an official presentation of the quince girl to the party guests, and much more. One of the final, and most important, rituals of a quinceañera is the changing of the quince girl’s shoes. Similar to cotillion and debutante traditions, quinceañeras serve as an official entry into society and womanhood for young Hispanic girls. And, serves to celebrate their heritage in front of family and friends.

A brief history of quinceañeras

Quinceañeras festivities as we know it today are directly inspired by ceremonial rites of passage practiced in the heart of Mexico by the Aztec Indians over 500 years ago. Back then, in indigenous cultures, young girls were considered marriage-ready by their 15th birthday. Once the Europeans invaded and overthrew the Aztecs in the early 16th century, it is suspected that the upper class began to adopt the debutante aspects of the native coming-of-age experience.

However, according to HowStuffWorks, “Quinceañera as we know it today, celebrated by thousands of girls around Central America and the estimated 400,000 Hispanic girls who turn 15 every year in the U.S., actually didn’t become ingrained in the Hispanic cultural fabric until recently. Prior to the 1960s, quinceañeras were occasions reserved for the upper classes.” 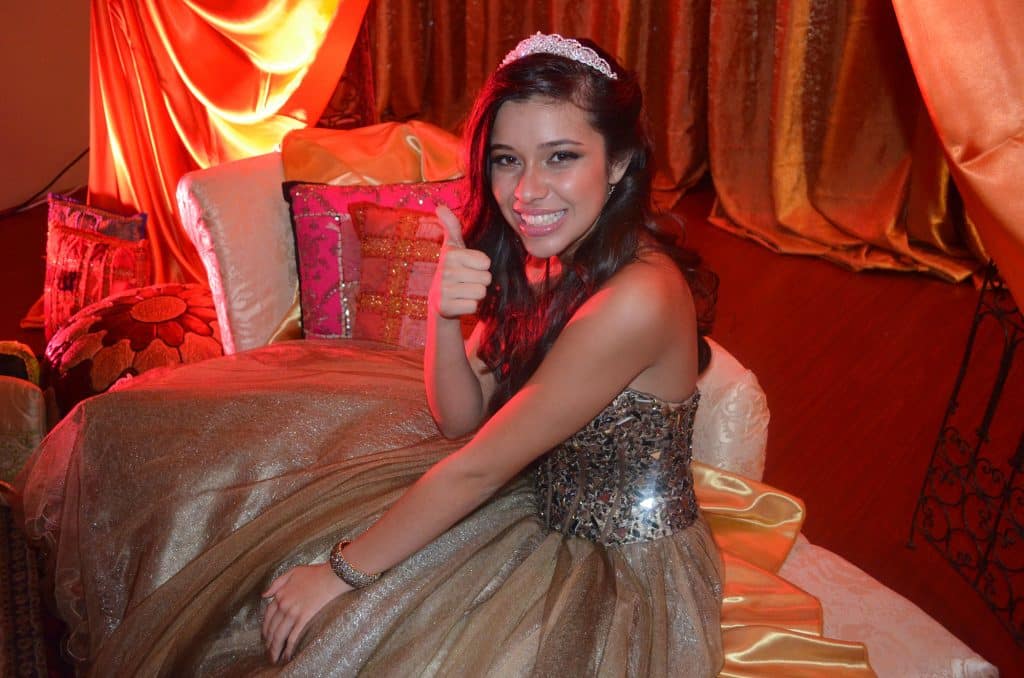 How much does it cost to throw a quinceañeras celebration?

Quinceañeras are increasingly becoming more elaborate affairs. It seems that the emphasis for quince girls and their parents is now more focused on the party than the prayer. If you happen to attend a quinceañera, take one quick look at the honoree on her big day – the high price tag should start to make some sense. A quinceañera dress is the visible centerpiece of the celebration. The floor-length gowns are often made of satin with lace overlays and rhinestone accents. Furthermore, event planners, bakers & caterers, hair stylists, makeup artists, D.J.s, and more vendors adds to the overall cost.

Although overall event costs will vary based on location and more, families in the United States can expect a low-end quinceañera celebration to cost at least $3,000. One way that parents of young teenage Hispanic girls in South Florida can keep the costs of their daughter’s quinceañera celebration down is to consider hosting it in an all-inclusive venue, like Grand Salon Reception Hall & Ballrooms. Call Grand Salon today on (888) 828-3266 and secure one of our amazing venues for your quinceañera today!